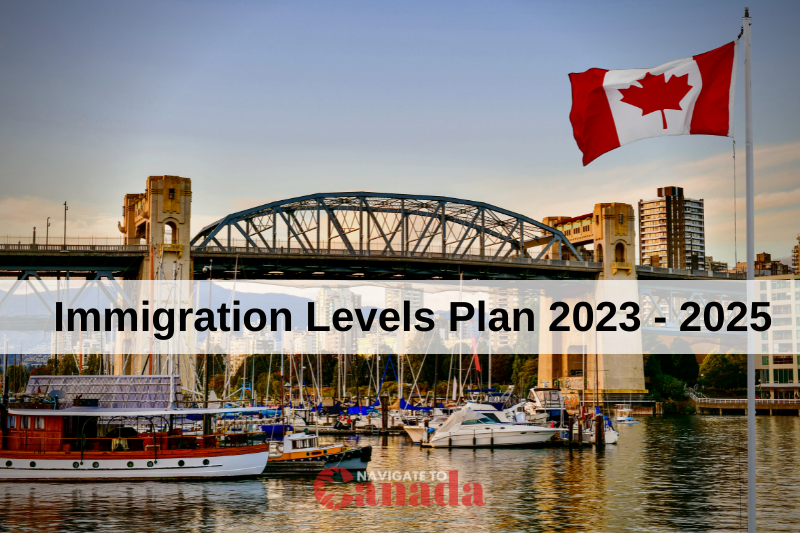 The Immigration Levels Plan is a guide for the number of immigrants that Canada intends to accept over the next three years.

Canada has officially issued its Immigration Levels Plan for 2023 to 2025.

Canada surpassed its all-time immigration record by accepting over 405,000 immigrants in 2021 and expects to receive close to 432,000 this year.

The Immigration Levels Plan is a guide for the amount of immigrants Canada intends to accept annually. Canada’s immigration objectives include bolstering the economy, reuniting families, and providing sanctuary to refugees escaping persecution overseas.

Targets for Express Entry and PNP will increase.

The majority of new permanent residents arrive via economic class programs such as Express Entry and provincial nomination schemes (PNPs).

The following increases will be made to the Express Entry landing quotas for principle applicants, spouses, and dependents:

The Spouses, Partners, and Children program will continue to target an annual intake of around 80,000 new immigrants.

The reduction of refugees and humanitarians is a goal.

The Immigration Levels Plan includes a quota for refugees and immigrants with humanitarian status. Canada has a long-standing reputation for granting sanctuary to refugees escaping perilous conditions in their native countries.

As a result of its continued efforts to fulfill many initiatives, such as the reception of around 40,000 Afghan refugees, Canada has high humanitarian class goals at now.

The 1980s marked the beginning of Canada’s current immigration policy. At that time, the government did not plan as far ahead and often based immigration goals on the economy of the day.

Fewer than 90,000 immigrants arrived in Canada in 1984. In anticipation of a labor shortfall in the early 1990s, the Conservative government of Canada upped immigration objectives to 250,000 new permanent residents over an eight-year period.

In 2020, it was difficult for IRCC to process applications due to the closing of borders and other travel restrictions. Nevertheless, Canada surpassed its immigration goal for 2021 and beat the record for the most permanent immigrants admitted in a single year with 405,000. Large allotments of quotas via the Canadian Experience Class and Provincial Nomination Programs enabled the achievement of these objectives (PNPs).

Canada is experiencing a historically rare labor shortage amid approximately one million job openings. Both are significant contributors to the nation’s expanding immigration goals.

Furthermore, labor shortages are exacerbated by Canada’s low birth rate, which is one of the lowest in the world at 1.4%. Due to the sluggish natural rise in population (the number of births still surpasses the number of deaths annually), immigration will soon be the only method for Canada’s population and labor force to expand. Newcomers are also required to maintain a solid tax base, which is crucial to Canada’s efforts to provide basic services such as education and health care.

The population of Canada is among the oldest in the world. By 2030, about a quarter of Canada’s population, or around nine million individuals, will have reached the age of retirement. This will result in a severe scarcity of labor across all economic sectors.

According to Canada’s primary immigration statute, the Immigration and Refugee Protection Act (IRPA), the government must declare the Immigration Levels Plan by November 1 of each year. However, the 2022-2024 immigration levels plan was the second to be released in 2022; the first was in February, after the most recent federal election on September 20, 2021, which postponed the announcement for 2021.

Or   See Other Visa Opportunities Here

For questions and guides, Drop your questions in the comment box below.