These are the top five universities to study in Ontario, according to Canada 2021 universities rating analysis. 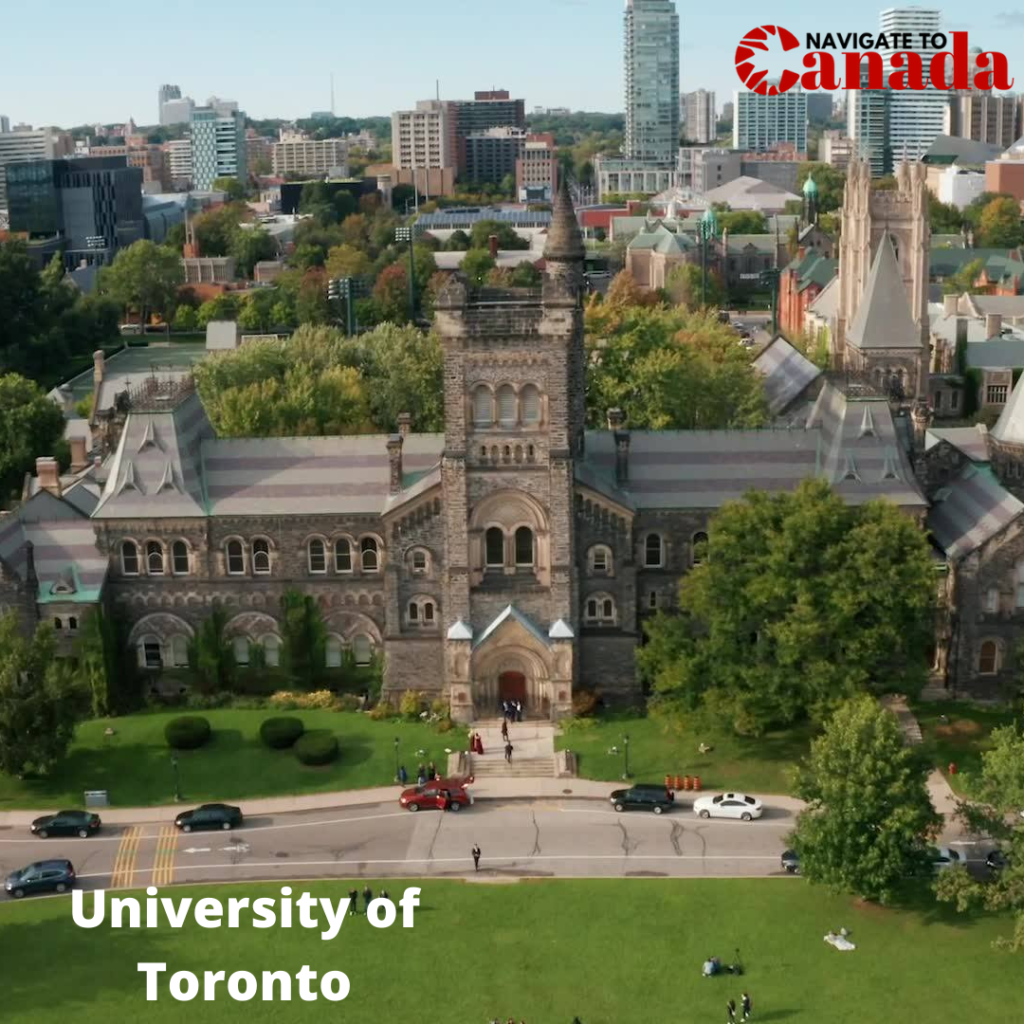 Ranked as the most diverse city in North America, Toronto and the surrounding Greater Toronto Area are vibrant, inviting areas with something for everyone. From sports teams to cultural happenings, festivals to street fairs, Toronto has it all. The total enrollment of students as for fall 2018 was 93,081 out of which 70,062, were in-state students and 23,019 were international students, coming from 159 countries and regions.

The University of Toronto, since its inception in 1827 has developed into Canada’s leading institution of learning, it represents a historic building of over 100 years old discovery and knowledge creation. The university proudly boasts to be one of the world’s top research-intensive universities, driven to invent and innovate.

University of Toronto, as it is famously called is a public research university in Toronto, Ontario, Canada. located on the grounds that surround Queen’s Park. Toronto and the surrounding regions are consistently ranked as one of the most diverse urban centers in North America. Toronto attracts great businesses, restaurants, entertainment and community events are everywhere you turn – and that’s what makes it a fantastic region in which to live and learn. University of Toronto has three campuses: Downtown Toronto (St. George), Mississauga (in the West) and Scarborough (in the East). 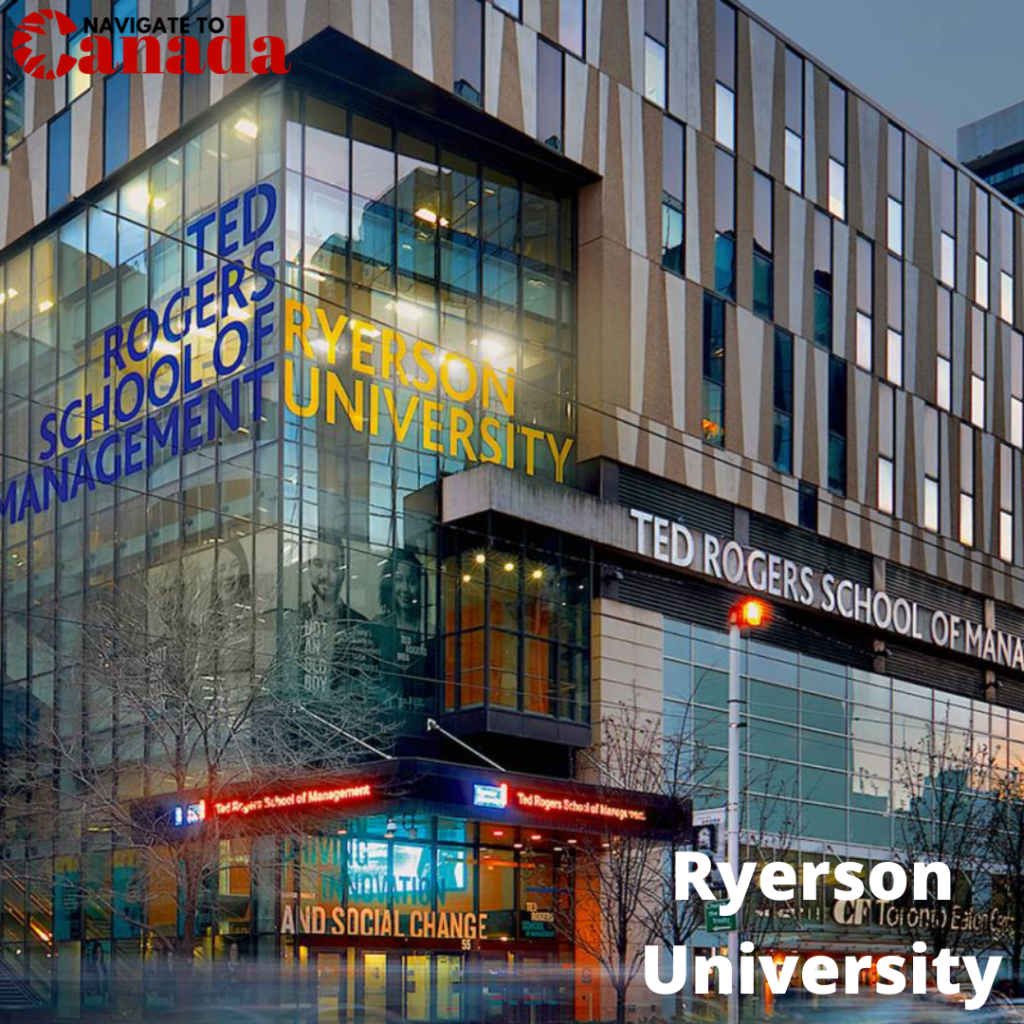 Ryerson University is Canada’s leader in innovative, career-focused education and a university clearly on the move. It is a distinctly urban university with a focus on innovation and entrepreneurship. Ryerson University has a mission to serve societal need and a long-standing commitment to engaging its community.

Guided by a bold Academic Plan, an ambitious research agenda, and a Master Plan to revitalize the campus and surrounding neighborhood, Ryerson University is the most applied-to university in Ontario relative to available spaces, and its reputation with business and community leaders continues to rise.

Ryerson offers more than 100 undergraduate and graduate programs. Culturally diverse and inclusive, the university is home to 38,950 students, including 2,300 master’s and PhD students, nearly 2,700 faculty and staff, and more than 140,000 alumni worldwide.

Research at Ryerson University is on a trajectory of success and growth: externally funded research has doubled in the past four years. The G. Raymond Chang School of Continuing Education is Canada’s leading provider of university-based adult education. The university’s focus on innovation and entrepreneurship is represented most distinctly by the Digital Media Zone, a place for students to collaborate and bring their digital ideas to the marketplace. 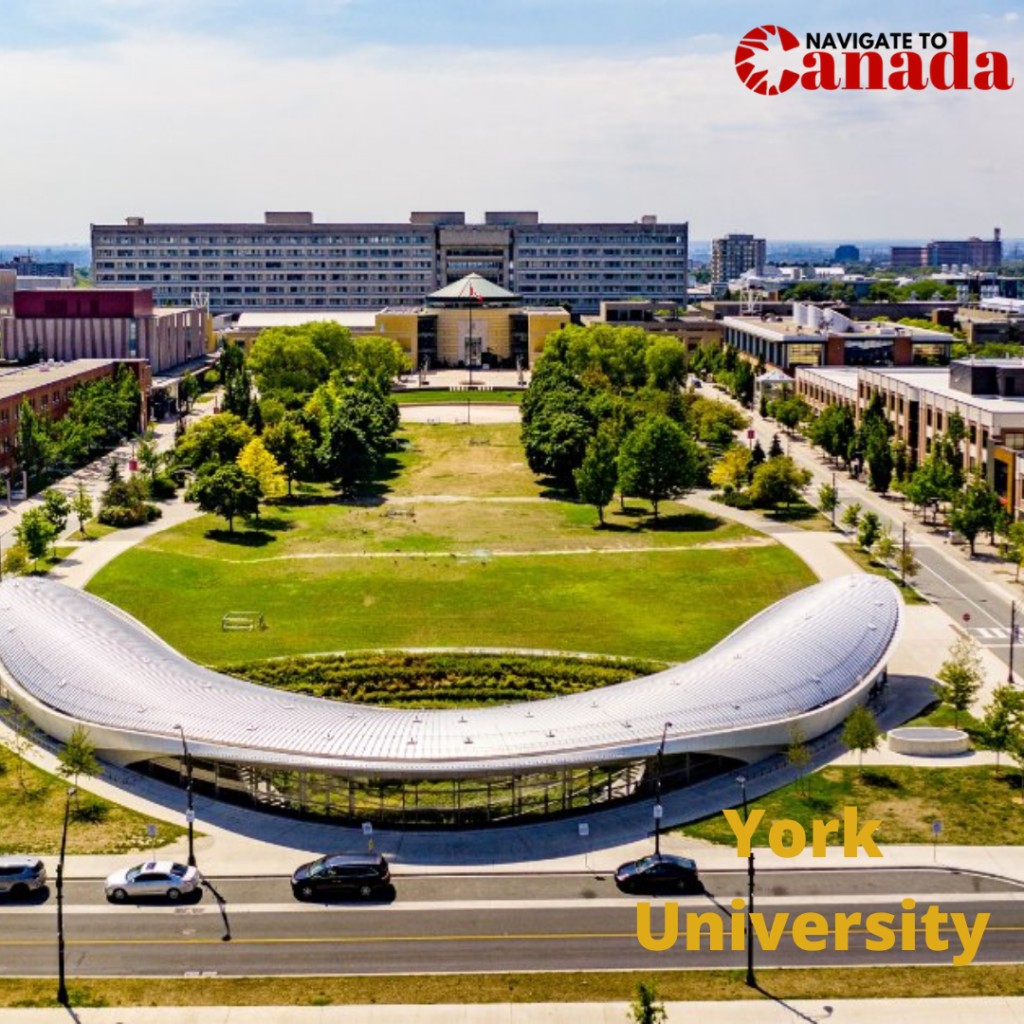 Another Toronto based institute, York University is Canada’s 3rd most extensive higher education facility (2nd largest in Ontario). Toronto is an amazingly multicultural city, and that is why York University boasts 8,500 international students from over 178 different countries! Anyone can fit right into this diverse community.
York University is world-famous for its ambitious partnerships.

The two main campuses are the Keele campus in the Greater Toronto Area and the Glendon campus in North York.
Keele the largest campus, offering over 160 Undergraduate programs, while Glendon is Canada’s only bilingual campus! In addition to the primary schools, York University has partnerships with other Universities in Ontario, Hyderabad, Costa Rica, and more. 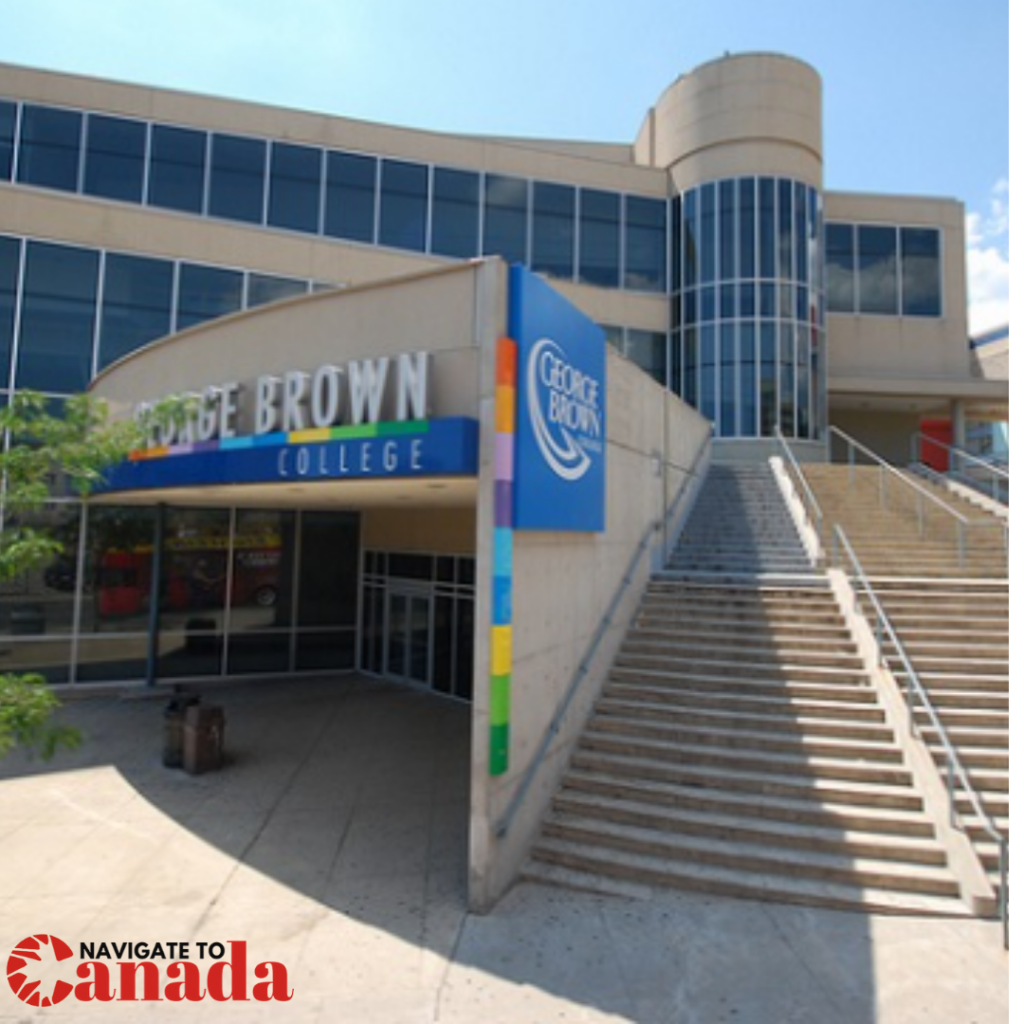 Located in Canada, George Brown College has 3 campuses, namely Casa Loma Campus, St. James Campus and Waterfront Campus. The Casa Loma Campus is the main campus and is known as clean and green space of the college. The second campus, St. James Campus comprises of five buildings and houses the faculty of Financial Services, Creative Arts, Business Administration, and Centre for Hospitality as well as Culinary Arts. The Waterfront campus is the newest campus, opened in 2012 and comprises of Centre for Health Sciences.
All the three campuses are nearby to restaurants, shops, and stores.

The college is located at a place where students are in reach of a job market, as the companies play a significant role in the academic life of students, providing them with practical experience, advice about meeting industry needs by building an effective curriculum and sharpen their skills in the particular field of interest.

George Brown College provides a number of subjects like business, art and design, engineering technologies, health sciences, and hospitality. Also, it offers specialized and diploma programs along with 28 graduate certificate programs. The college is home to over 26,000 including 4,000 international students. 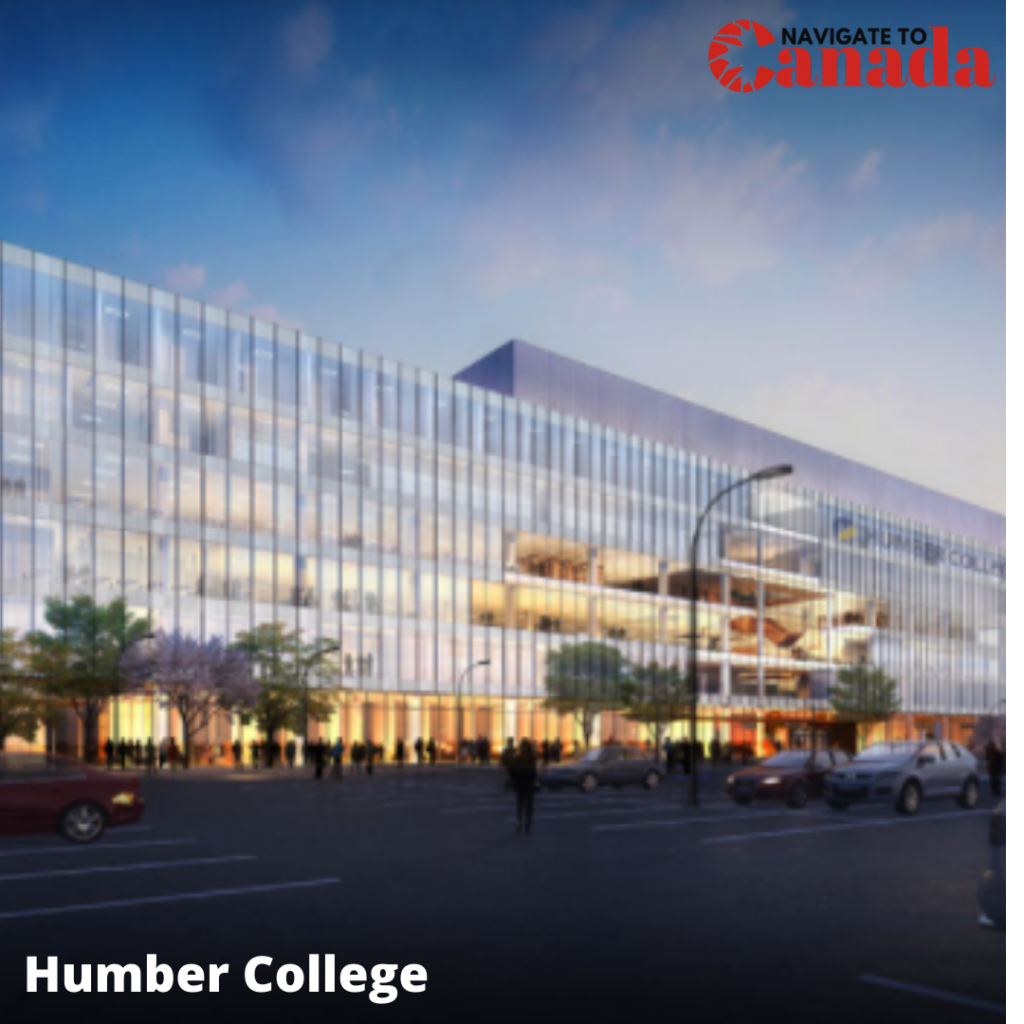 Generally referred to as Humber College, the Humber Institute of Technology and Advanced Learning, was established in the year 1967. It serves as a publicly-funded college in Ontario in the country of Canada. It is home to 3 main campuses, Lakeshore campus, Humber North campus, and Humber Orangeville campus.
It offers 200 plus programs which include a bachelor’s degree, post-graduate certificate, and apprenticeship programs. Apart from all these courses to study, Bridge Training programs are featured too by Humber College for globally trained professionals in the fields of information technology and engineering. It is the first Ontario College to get Silver Rating for Sustainability Tracking Assessment Rating System.

Located close to the Humber River, the North Campus of the institution has more than 19,000 full-time students and 1,000 of them living in residence. The campus provides both full-time and part-time programs in a range of fields that include Health Sciences, Liberal Arts, Media Studies, Applied Technology, Business along with Hospitality and Tourism. The Lakeshore campus of Humber College, situated along Lake Ontario’s shores, is home to more than 10,600 full-time students with 400 living in residence.

Orangeville campus of the institution offers 6 wireless classrooms, a computer lab, and an on-site fitness center with a swimming pool, a food court, two hockey rinks, a library, and a restaurant. For students wishing to pursue careers in the fashion and beauty industry, The Fashion Institute of the Humber College features an ideal environment.